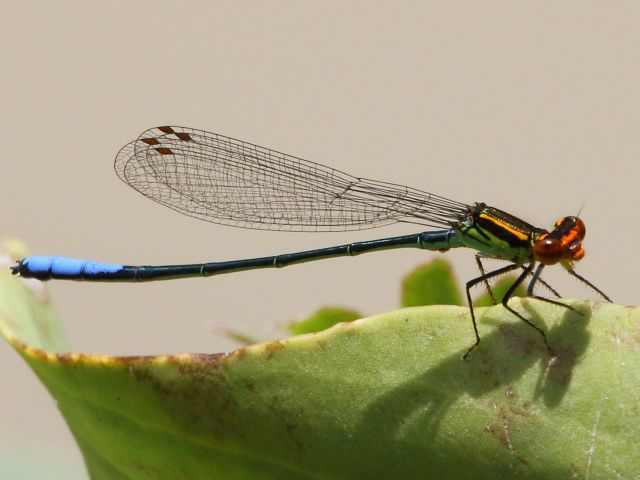 Thorax is dull black above, orange and black stripes and light green sides. The last 2/3 of S7 and S8-9 is very bright blue above S10 is black with expanded hart-shape in bright blue.

Little is known about this species but can be found amongst grass stems near the rivers.

P. newtoni is known from only a few specimens. It is currently known to exist in only one location, where it is abundant, and it is expected to occur elsewhere in the area because extensive alien invasive tree removal is underway to improve habitat there. It is clear that the population has suffered a severe decline in the recent past. In addition to the species' natural rarity, its specialized riparian habitat (tall grasses) is under threat from increasing pressure from domestic livestock (especially cattle) visiting the water's edge. Not listed as Endangered because it occurs in a type of general habitat that is very extensive and has not been fully explored and because the removal of alien trees has an extremely beneficial effect on this species; there is a trade-off between improvement of habitat by tree removal and deterioration through overgrazing. It is assessed as Vulnerable based on its restricted range.